Melissa and Jack did a full group Hypnobirthing course to prepare for the birth of their second baby after a traumatic experience with their first birth. I also supported Melissa with birth trauma recovery. 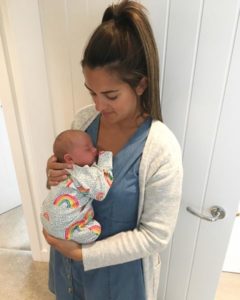 I just wanted to say THANK YOU. What a happy birth story and it’s all thanks to you. My waters went at 6am on Tuesday morning. I came to Burnley to be checked and they let me go home for 24 hours to let things progress naturally. 24 hours passed and nothing changed. Usually they induce at this point but because all was well with the baby and me I asked for 24 hours more. I went home and tried all the ways I knew to release oxytocin but not much changed. On Wednesday I booked in at 8am on triage. I’d been told that because it had been over 24 hours since my waters had broken (50 actually!) that I would be on the birth suite under the guidance of doctors and midwives. I felt so disappointed. I didn’t want an induction, I wanted a natural water birth. They checked me and said I was only 1cm. They gave me a sweep and asked about the pessary. It all happened fast but I agreed. All of this whilst Jack waited in the car. I was scared.

They admitted me to the ward at 10:30am and said if things hadn’t progressed by 9pm then they would put me on the oxytocin drip. I knew I didn’t want this so I listened to my body and got in the zone. I listened to your affirmations. I visualised and meditated. As the day passed, the surges grew stronger and I timed them. The midwife examined me and said the surges were close enough to go over to the birth suite. I was so happy because Jack could come and join me. He arrived around 4pm.

My amazing midwife Gemma explained that she was going to break my remaining waters. From then on things started to ramp up and still I was breathing through this and the surges using Hypnobirthing. As the surges got stronger and stronger and lasted longer I asked for gas and air but only used it for a few of the surges. Because of the time since my original waters had broken I had to be constantly monitored. This time I was vocal and said I’d like to be mobile as I knew upright and forward are the positions to optimize birth. Gemma was amazing and sorted this out for me. As soon as I was upright the contractions came fast and hard. Gemma knew how important the water birth was to me and said let’s run the pool. When I got in I couldn’t have been happier. Jack was there by my side ready with his words and tickles and the gas and air. The whole time I visualized my uterus contracting up and breathed through them. I knew and understood that my body was doing the right thing for me and our baby.

I was so in the Hypnobirthing zone at this point and I could feel my body turn from up contractions to wanting to push. I told Gemma I think things had changed and calmly knew to switch to J breathing. I just knew she was coming. I let my body do what it needed and assisted with getting as much air down through breathing and relaxing. Gemma was writing my notes and handing over to the 8 o’clock staff, I said she’s coming. I don’t think anyone believed me but I knew it. At 8pm during the NHS clap I did my first J breath allowing my body to do what it wanted. Three pushes in total and she was born calmly into the water at 8:11pm.

It was the most euphoric moment of my life. I felt amazing!!!!!! She swam under me and when I picked her up the cord was round her neck but the midwives sorted this so quickly. We then got skin to skin. No rushing to weigh, delayed cord clamping and took photographs too. I needed stitches and that was done whilst Jack had his skin to skin. The midwives commented on how amazing it was to witness. One even said it was one of the nicest births she had ever seen and it made her emotional Gemma stayed passed her shift to help and watch. Without Hypnobirthing or your advice and the trauma reset work I know it would have been so different. But I used everything you taught me. I remained in control, calm and the breathing and affirmations made it what it was. I was telling Jack after I did it that I did it with my Up and J breathing and the midwives were fascinated and said I’d done amazingly well. I didn’t even have a paracetamol.

So thank you so much from the bottom of my heart because if I’d never have met you who knows where the fear of all those birth challenges would have taken me. Thank you for teaching Jack too because he was just amazing!! To say I’m proud and feeling like a warrior right now is an understatement.