Eleanor and Dave did a group Hypnobirthing course to prepare for the homebirth of their second baby.

“At 41+1 I took part in a Sunday evening relaxation session with Meg. That afternoon I had been feeling unusually emotional and tearful, and as we headed into the week where I would be 42 weeks pregnant I was getting nervous about the pressure I might come under to have extra monitoring and interventions. Meg was so reassuring and helped calm my mind so much.

That night I woke up at about 1am feeling mild intermittent cramping sensations, which lasted about three hours, then I drifted off to sleep again. I wondered whether this was something happening, but in late pregnancy I’d noticed all sort of aches and pains so I didn’t know whether this was a sign or not. In the morning I wasn’t feeling any sensations, but slowly during the day I started to notice the sensations coming back and they felt more like recognisable surges with a rise and a peak. I watched lots of TV, breathed through them and felt really good. By about 7pm they were becoming more regular and frequent and then they built in intensity, frequency and length through the evening.

Dave set up our birth space in our lounge, covering the floor, inflating the pool and putting up fairy lights, and I put up lots of pictures of us with our toddler, and of a favourite place. I ate something and then went to bed to try and rest. By about midnight I couldn’t stay lying in bed anymore, I wanted the TENS machine on and we went downstairs into our birth space. I got onto my knees resting over the birth ball, rocked on there and breathed my way through the surges. As they got more intense, I asked Dave to be with me, stroking my back. At about 1:30am he called our Doula and she set off to join us, and then he called for the midwives. He made the call in the room because I didn’t want him to leave me, and I heard the midwife say they might not be able to come out to us, and could I go in to the birth centre. He was brilliant in talking to them, very politely but firmly saying that I wanted to be at home- they said they’d call back.

Our doula arrived at about 2:30 and things were steadily getting more intense. She gave me lots of counter pressure on my back, which helped, and I used the boost on the TENS machine and focused on breathing. At around 4am things got really intense and my surges became almost back to back without let up. I was feeling a lot of pressure in my back and starting to really feel a downward movement into my bottom. This was the only point I felt I started to lose control a bit, Dave and our doula reminded me to slow my breathing, and on my outbreaths I said ‘Caaaaaaalm’ and ‘Breeeeeeeathe’ to remind and reassure myself. The midwives called at this point, they were on their way and arrived soon after. Dave was brilliant, taking them straight into our kitchen to greet them and show them our birth preferences. The surges continued to get more intense and I noticed a bit of a trickle of fluid between my legs. Sue the midwife observed how things were ramping up and wondered if my waters had gone, so suggested I go to the toilet and she could check the pad I had in. I was a bit shocked to see quite a bit of blood on the pad, and it seemed to alarm Sue, who went and spoke to her colleague and then came back and said she thought I needed to transfer to labour ward.

Dave had had a discussion with them in the kitchen and they were worried about the placenta detaching. Our doula observed that there wasn’t any more blood in the toilet and that what had come away looked very mucousy, and she felt it just meant baby was imminent. I stood up from the toilet and my legs were shaking with adrenaline. Transfer to labour ward was mentioned again, and at that point my body took over and started pushing, and I started emitting a loud and totally unexpected mooing roar! Our doula helped me back into the living room and it happened again. Sue asked me if I was pushing and what I was feeling and I said things had changed, the surges felt different and I was getting a break between them again, and I felt like I needed a poo. I think I even said ‘I’m feeling foetal ejection reflex’- that’s how knowledgeable Meg’s course had made me! 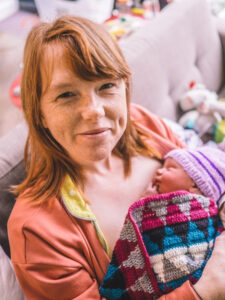 Dave’s favourite part was that I said after a particularly strong and loud mooing roar ‘It’s not me doing that!’ and it wasn’t- my body was completely in control and it was totally involuntary. It was a push, pause, push, pause, push and then it would fade away and I would get a rest. It was amazing. I tried various positions in the pool and I think it was at this time that Sue asked if I would consent to a vaginal examination. I felt that it was pretty clear what was happening, that I would find it very invasive and disruptive and that it wouldn’t tell me anything I needed to know. My body knew what it was doing. She asked twice I think, because I didn’t respond, but after that she didn’t ask again. After a while our doula said to Dave that the baby’s head was visible. I kept trying different positions, lots of KICO, but he wasn’t coming out any further. Sue asked me to stand in the pool, and then to get out and try squatting and finally to lie on my side. I can remember saying ‘come on baby’ as I pushed. I was having some gas and air by now, and I could tell the midwives were getting a bit more concerned about things. Dave told me later that they had a discussion and said my contractions were quite short and not giving me much to work with, and our doula said they were concerned because the baby’s heart rate went over 200 a couple of times. I could feel that my contractions were getting shorter and less powerful.

Sue said she thought an episiotomy was needed. She allowed me some time to think and when she asked again I agreed, without hesitation. I knew my body was tiring and I knew I’d been pushing for a long time without it getting the baby any further out. After that things are a bit of a blur but I remember feeling him come out, how slippery he felt and then Dave passing him to me and straight onto my chest. He was slippery and warm. Apparently he came out with his arm by his head. I was in absolute awe, I stared at our doula and at Dave open-mouthed. I remember saying to our doula ‘That’s why you do this job’ as she smiled at me. Dave came to be by my head and I said ‘I did it, I did it’. I cuddled the baby while his cord continued to pulse. Our doula said it went white very quickly but Sue was very diligent and checked for a pulse, and said it was still pulsing, so she waited until it had stopped completely, then clamped and Dave cut the cord. Soon after I could feel her palpating my tummy and then felt her pulling slightly on the cord. I asked our doula if Sue was pulling the placenta out. I’d said I wanted a physiological third stage, and our doula asked if I wanted Sue to stop but I said it was ok as it wasn’t hurting in any way, and really quickly the placenta was delivered. We discussed it afterwards and our doula said it was really quick to come and maybe Sue the midwife could actually see the placenta was right there ready to come out. Dave showed it to me in the bowl. The midwives quickly retreated and left us alone for an hour of skin to skin. I remember trying to get the baby to latch but I was lying on the floor on my back and it was awkward. I hand expressed colostrum and he licked that up. Our doula asked me if we had a name and I checked with Dave whether he wanted to stick with what we’d agreed and he said he did so I told her his name was Aubrey. The midwives swapped shifts and a new midwife called Elaine examined me. I had a second degree tear on the opposite side to the episiotomy (possibly caused by his hand being where it was) and my cervix was a long way forward. Elaine felt I needed to transfer to be stitched by a doctor and her supervisor Rachel agreed. Elaine gave me some hands on help to latch Aubrey and he fed. She left after a while and I tried to do a wee and then got dressed. Our doula came to hospital with us- Elaine phoned ahead to check both she and Dave could come. Elaine met us at labour ward and we were shown into a room. It took quite a while for the doctor to come, we chatted and waited. Eventually I was stitched with local anaesthetic and lots of wonderful gas and air and Dave drove us all home, where Mum had left food on our doorstep. We sent our doula on her way to get some sleep and we had Mum’s tomato soup on the sofa and soaked everything in. Later we went to bed for skin to skin and feeding, and had takeaway pizza in bed  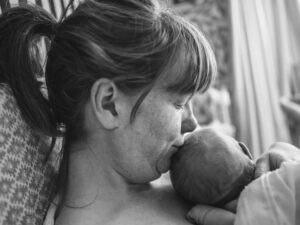 I have never felt more proud in all my life than I did that day. I am so unbelievably happy I got to have my birth at home and all of the decisions I made felt completely right for me. Aubrey has been settled and happy so far, his feeding is really good and when he was weighed at five days old he was over his birth weight already. I believe that waiting to go into labour spontaneously, when we were both ready, and having the birth experience I had, all contributed to how well both he and I have been”